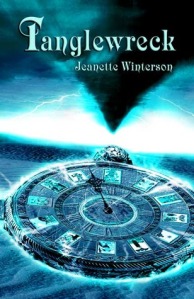 I am in awe of the imagination of Jeanette Winterson, author of Tanglewreck, (2006, 413 pages). This fantasy novel has many light moments and is funny at times, but also has parts that are very dark and creepy. It is a complicated, multi-layered story. It is about love and what human beings will do for love, as is A Wrinkle in Time, but I found Tanglewreck less stilted than A Wrinkle in Time.

Something frightening is happening with time. One moment, a time tornado rages through the streets of London, and those caught up in its path vanish without a trace. The next moment a woolly mammoth is seen lumbering along the banks of the River Thames. At the center of these bizarre time warps is a house called Tanglewreck, which is home to eleven-year-old Silver, her bony and bad-tempered aunt, Mrs Rokabye, and a mysterious clock known as the Timekeeper. Silver doesn’t understand exactly what the Timekeeper does, but when two sinister figures come looking for it, she knows instinctively that she must guard it with her life.

This plot summary touches on aspects of the book, but does not capture what I feel is the heart of the book, which is main character Silver’s quest to destroy the forces of evil. The evildoesrs are Abel Darkwater and Regalia Mason who are trying to gain mastery of the world so they can control time. The other essential theme is the power of the friendship between Silver and her friend Gabriel.

I LOVED (yeah, I actually feel all caps is called for) Gabriel. When Silver first met him, he was somewhat simple-minded by her modern standards, funny-looking, and had an odd way of talking, perhaps due to the fact that he had lived underground with his tribe of Throwbacks a very long time. Although he appeared to be about thirteen years old, he was actually hundred of years old. Here is Gabriel described as Silver first meets him:

There was the boy; about four and a half feet tall, heavily built, wearing a dirty blue coat fastened here and there by brass buttons, over a collarless shirt… His hands were like the front feet of a mole; spade-square with thick fingers. He had black hair, a very pale face, big moony eyes, and, this was it, this was the thing, he had the biggest ears on either side of his head that Silver had ever seen on a human being. If he was a human being…

I think it was a brave choice that the author made the main characters well-developed, while several other characters are one-dimensional and cartoonish. I believe it made me even more invested in Silver and Gabriel’s well-being.

Dialogue, of which I am the hugest champion, is a strength of this book. Silver speaks with typical words and expressions, while several of the other characters have a unique dialect. I can’t recall another book where the characters have such distinct voices. It contributed to making the book interesting.

I found Winterson’s prose style to be unique. I don’t know enough about rhythm in narrative to explain why, but some lines begged to be read aloud. It made me want to read her recently released memoir. Some of the writing in Tanglewreck, like the below paragraph reminded me of something. I think what it reminded me of was Alice In Wonderland.

…the train had got jammed in Time. “What do you mean, we are jammed in Time?” demanded Mrs. Rokabye. “I have paid for my tickets, two tickets, as it happens.” The guard shrugged. “Nothing I can do about it. Happens a lot lately. The train can’t go forward until Time goes forward. Simple as that.” “But have we gone backwards?” asked Mrs. Rokabye. “No,” said the guard, “and praise the Heavens for that or I’d have to get out of bed all over again. We haven’t gone backwards, but we haven’t gone forwards either, which for a train is a misfortune.”

Don’t be deterred by the blue cover image of the book, or another you may find online. Both leave me cold. I don’t feel they capture the emotion of the book. Also, take some negative reviews of this book on Amazon.com with a grain of salt. Some of the lack of stars were because reviewers felt the book would would be too confusing to middle grade kids. According to the author’s website, Tanglewreck is a book “for children”. Although the protagonist is only eleven, I do not believe this book would be appropriate for many middle grade readers. The plot is too complicated, the storyline too horrifying at times (like when  people got thrown into a black hole) and the Lexile measure is 850. I think it should be shelved in the Young Adult section.

5 Responses to Tanglewreck, by Jeanette Winterson