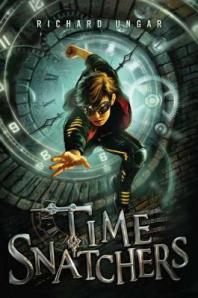 Time Snatchers by Richard Ungar, (2012, 321 pages) has an intriguing title, cover, and  plot premise: the main characters travel back in time to steal valuable objects for their boss. It is written from the point of view of thirteen-year-old Caleb, professional thief.

A thrilling middle-grade sci-fi. Caleb’s blinders are off. The small group of orphans who were also “adopted” by Uncle used to feel like family, but the competition to be the top time snatcher and the punishment for failure has gotten fierce. Time traveling to steal valuable objects can be a thrill, but with bully Frank trying to steal his snatches, his partner Abbie falling for Frank’s slimy charms, and Uncle’s plans to kidnap innocent kids to grow his business, Caleb starts thinking about getting out. But Uncle’s reach extends to any country in any time period, and runaways get the harshest punishment of all.

Caleb can steal just about anything from the past, but can he steal a family for the future?

I found this book a little slow at the beginning. Caleb and his best friend Abbie take several trips into the past in episodes that feel somewhat disconnected. However, halfway into the book, I was hooked. I don’t want to give too much away, suffice to say the stakes get higher.

Unlike some time travel books in which the actual time travel process is not described in detail, in this book the mechanics of the time travel are front and center in the plot. Caleb and Abbie are from the future (2061). Their boss has perfected technology that enables his workers to travel to precisely the time and place desired. One just has to program the implant on one’s wrist. There are additional computers involved; I didn’t try to follow all the specifics. I appreciated the way the author worked out the time travel to make it sound plausible, although I can equally enjoy a time travel story that gives only the briefest mention to the physical process of time travel if it’s a captivating story.

There are some short scenes of maiming and what I would call torture. I can’t broadly recommend the book for this reason. For some older middle grade readers who may be jaded by hours of violent movies/books, these scenes would not pose a problem. Also, I and other potential readers may dislike the fact that the ethics of stealing are hardly touched on, if at all. Finally, it is believable that saving himself and a couple others from Uncle’s evil is the most Caleb can do, but I would have preferred Caleb at least mention that he wishes he could stop Uncle from harming so many others. Perhaps in a sequel?