Indian in the Cupboard Sequel (The Return of the Indian), by Lynne Reid Banks 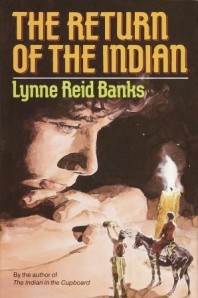 The first book in this series, The Indian in The Cupboard (my review) I found truly magical, and it made it onto My Top Ten Time Travel Books list. This second one in the series, The Return of the Indian, Lynne Reid Banks, (1986, 189 pages), isn’t nearly as good but still worth reading, especially for fans of the original.

It’s been over a year since Omri discovered in The Indian in the Cupboard that, with the turn of a key, he could magically bring to life the three-inch-high Indian figure he placed inside his cupboard. Omri and his Indian, Little Bear, create a fantastic world together until one day, Omri realizes the terrible consequences if Little Bear ever got trapped in his “giant” world. Reluctantly, Omri sends the Indian back through the cupboard, giving his mother the magic key to wear around her neck so that he will never be tempted to bring Little Bear back to life.

Unlike in the first book, Omri and his friend Patrick get to go back to Little Bear’s time, in a manner that I thought was very creative on the author’s part. However, this trip is brief and most of the time travel in the book involves people from the past coming to Omri’s time. Omri decides he needs to buy more plastic Indians to bring to life to help Little Bear. I  liked how the point was made that not all Indians were from the same tribe or dressed alike. Omri also feels the need to bring a small plastic figure of a nurse to life. It was with anticipation that I waited to see what her personality would be like and I wasn’t disappointed. Like the original, this story also has great details that a kid could relate to, such as using a toothpaste cap as a cup for the tiny people.

There was more talk of battles in this book which did not interest me too much, but may pique the interest of some kids. There were social issues addressed in this book that were not present in the first, such as Omri moving to a poorer neighborhood, and Omri being bullied by skinheads. As an adult, I wanted Omri to seek adult help for the bullying, but maybe that would not have been realistic. At first when Omri and Patrick reunite there is awkwardness and uncertainty. I liked how the author dealt with seeing your former best friend whom you have not seen in a year. I am eager to read another book from this series.

I blog about middle grade and YA time travel books. I'm the author of Time Jump Coins. Email me at timetravelmagic (at) yahoo (dot) com.
View all posts by Susan →
This entry was posted in Book reviews and tagged Indian in the Cupboard, kids' time travel stories, Lynne Reid Banks, middle grade fiction, Return of th Indian, time travel books for children. Bookmark the permalink.

4 Responses to Indian in the Cupboard Sequel (The Return of the Indian), by Lynne Reid Banks