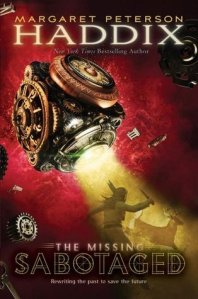 Sabotaged (The Missing, Book 3), by Margaret Haddix Peterson (2011, 400 pages), is good, but in my opinion, the real history of the Lost Colony of Roanoke on which this story is based, is even more fascinating than the fiction. To get the most out of Sabotaged, I recommend familiarizing yourself at least a bit with the real mystery, perhaps by reading this article at How Stuff Works, or this one at Wikipedia. Actually, the author includes a 17-page (yes, I wrote that correctly) historical note at the back of the book which I don’t think has any spoilers, so you could totally just read that. I’m fortunate because my fourth grade daughter has been studying this mystery as part of the NC social studies curriculum and she has shared with me me some historical tidbits.

After helping Chip and Alex survive 15th century London, Jonah and Katherine are summoned to help another missing child, Andrea, face her fate. Andrea is really Virginia Dare, from the Lost Colony of Roanoke. Jonah and Katherine are confident in their ability to help Andrea fix history, but when their journey goes dangerously awry, they realize that they may be in over their head. They’ve landed in the wrong time period. Andrea doesn’t seem that interested in leaving the past. And even worse, it appears that someone has deliberately sabotaged their mission…

As in the first two books in this series, I found the main brother/sister characters of the series, Jonah and Katherine, to be well-developed and likeable. Andrea, first introduced at the end of the first book is also pretty interesting. The dialogue, and Jonah’s internal monologues, many having to do with being embarrassed in front of his crush, are both fantastic. I loved that this book dealt with the Lost Colony. As in the second book, I got a little history lesson. I appreciate the fact that mistreatment of American Indians by English colonists was addressed in a sensitive way.

However, there was not enough historical detail to satisfy me. I didn’t learn as much as I had hoped. I would have preferred more focus on the setting. As it was, I couldn’t picture the whole scenario better after reading the book than prior. This book was all about plot. The plot was complicated, and I’ll admit it, hard for me to follow. The characters spent a lot of time trying to sort out the good guys vs. bad guys. There was a little too much discussion of tracers. Tracers are faintly lighted objects and people that appear as they originally would before time travel  disturbed them. (I kept forgetting if the tracer ghosts were the original people or the time travelers, although the author takes pains to explain it more than once.)

But, Jonah and Katherine have really endeared themselves to me. I really care about what happens to them! So where they go, I will follow. I will read more in this series soon.

1 Response to Sabotaged: The Missing: Book 3, by Margaret Peterson Haddix