At the Firefly Gate, by Linda Newbery 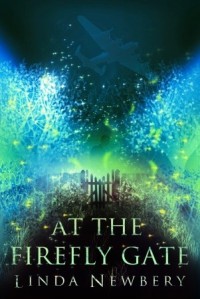 I love that Linda Newbery, author of  At the Firefly Gate (2008, 162 pages), did not bite off more than she could chew with this book. It’s a quiet story, as much about friendship as time travel. There are no spaceships or gratuitous explosions. It is not edgy or dark, just a good heartfelt story, heavy on the atmosphere. (The feel of this book reminded me a little bit of Charlotte Sometimes, high praise, since that’s just about my favorite time travel tale.) You can get a sense of the mood of this book from this excerpt about grass.

Peering closely, Henry had to admit that he’d never properly looked at grass before. There were purples and silvers and brown, shimmering in the light; there were silky strands and silvery tufts and golden beards and plump seeds like oats. He wanted to run his fingers through the grass waterfall.

Henry has always felt like an outsider and things are about to get worse when his family moves to the countryside and the prospect of a new school looms. He retreats more and more into his shell, until he meets Dottie, a frail old lady, who has tremendous spirit. He feels as though he knows her, as though they have been friends for many years. And as she tells him about her wartime romance with a Royal Air Force navigator also named Henry, our Henry is drawn into that world. In a series of mysterious, sometimes frightening events he re-enacts Henry’s life . . . and learns that despite being dreadfully afraid, Henry acted heroically at the cost of his own life. Only our Henry knows the true story and it shows him a way through his own self-doubts and misgivings.

I rolled my eyes internally before I read this book when I learned that it was going to be yet another kids’ time travel story which starts out with the main character moving to a new town. It seems like half the time travel books I read start this way. I get it that it makes more sense to find a time travel “portal” in a new place. Because if the portal was in the place a kid had already lived a long time, why wouldn’t s/he have found it by now? But I like when an author can pull off the latter type of plot.

Actually, the time travel in this book does not really have a portal, unless you count Henry’ s dreams, and scrabble words that emerge like messages on a ouiji board, and memories he has that rightly belong to someone else. Other than that, the time travel consists of someone who died a long time ago but is still hanging around, i.e a ghost.

My favorite aspect of this book is the relationship Henry has with a neighbor girl with whom he is often thrown together for the convenience of their parents. She is really not nice to Henry, in a very believable way. Their  friendship evolves, but they are not best friends at the end, or worse boyfriend and girlfriend like in so many stories and sappy movies.

10 Responses to At the Firefly Gate, by Linda Newbery