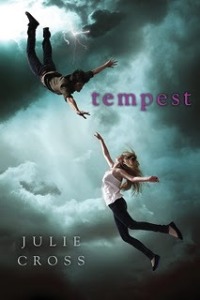 Tempest by Julie Cross, (2011, 332 pages), is a romance with the interesting twist that the young man in the couple has just discovered he is a time traveler. Jackson’s abilities make him valuable to people fighting to keep the world safe, as well as to those who would destroy it. This makes his life dangerous, and also imperils his girlfriend Holly. Jackson’s ability to go back in time and see younger selves of Holly as well as his sister makes for a sometimes poignant story.

The year is 2009.  Nineteen-year-old Jackson Meyer is a normal guy… he’s in college, has a girlfriend… and he can travel back through time. But it’s not like the movies – nothing changes in the present after his jumps, there’s no space-time continuum issues or broken flux capacitors – it’s just harmless fun.

That is… until the day strangers burst in on Jackson and his girlfriend, Holly, and during a struggle with Jackson, Holly is fatally shot. In his panic, Jackson jumps back two years to 2007, but this is not like his previous time jumps. Now he’s stuck in 2007 and can’t get back to the future.

Desperate to somehow return to 2009 to save Holly but unable to return to his rightful year, Jackson settles into 2007 and learns what he can about his abilities.

But it’s not long before the people who shot Holly in 2009 come looking for Jackson in the past, and these “Enemies of Time” will stop at nothing to recruit this powerful young time-traveler.  Recruit… or kill him.

Piecing together the clues about his father, the Enemies of Time, and himself, Jackson must decide how far he’s willing to go to save Holly… and possibly the entire world.

Jackson gets unexpectedly stuck in 2007. But he can’t stay away from Holly, who is his girlfriend in 2009, and whom he loves. He gets a job at the gym where Holly teaches gymnastics, so he can be near her. But this decision is fraught. After all, she does not recognize him. He is a stranger to her. Jackson ends up wooing her all over again. This time is different in some ways, however. For example, in 2007 she’s only seventeen, and he doesn’t feel they should be sexually active like they were in 2009. This takes restraint on Jackson’s part.

Jackson had a twin sister who died several years earlier. He never got to say a proper goodbye. However, via the magic of time travel he might get a second chance. The author did a great job describing this brother sister love, and it was moving to imagine doing better with a final goodbye. Jackson also gets to spy/eavesdrop on some younger selves, which is fun.

As for main character Jackson, I’m not a huge fan. I felt like the author was trying to depict Jackson as a guy who was the epitome of nineteen-year-old “cool”: rich, strong, experienced with the ladies, straight-whiskey-drinking, “I’ve never been friends with a science geek before”. Meh. I prefer men with a touch of nerdiness, but then, I’m way past my teen years. Jackson was brave and gallant and constantly protecting Holly, if you like that sort of thing in a hero. 🙂

There were a several other time travelers appearing throughout the book who were either shooting at people or trying to talk to Jackson. Jackson was trying to figure out if they were good guys or bad guys. I was having difficulty sorting them out too, so I gave up trying. There was a lot of CIA/secret agent stuff.

Statements like, “I couldn’t remember the last time I had been with a virgin, even just messing around. Maybe never.”(Jackson) or, “Let’s get totally trashed” (Holly), as well as a few explicit sex scenes keep this book firmly in YA (not middle grade) territory.

This book is the first in a trilogy that also includes Vortex (2013), and Timestorm (2014).This book reminded me a bit of Yesterday by C.K. Kelly Martin (my review), which I liked  better.

I blog about middle grade and YA time travel books. I'm the author of Time Jump Coins. Email me at timetravelmagic (at) yahoo (dot) com.
View all posts by Susan →
This entry was posted in Book reviews and tagged Julie Cross, kids' time travel stories, Tempest, YA Fiction. Bookmark the permalink.

1 Response to Tempest, by Julie Cross