The Freedom Maze, by Delia Sherman 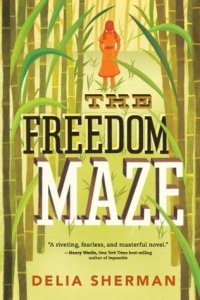 The Freedom Maze by Delia Sherman, (2011, 267 pages) is my new gold standard for time travel novels. This story is an exemplar of my very favorite kind of time travel tale because it has the following three aspects: 1.) The main character journeys to the past to a world that is detailed and complex. 2.) As a reader, because I can identify with the character from relatively modern times, I can easily put myself in the character’s shoes and so the historical period comes to life for me in a way that a book of historical fiction may not quite accomplish. 3) The main character grows and is in some way transformed, through visiting this other time/place.

There are so many levels of this book to admire: the dialogue that sometimes reads like poetry; the characters who are anything but one-dimensional; the details of how the community of slaves worked together that could only be drawn from extensive research; the incredible setting of the plantation which is a world unto itself, and of course the broader setting of Louisiana in 1860; the fact that it works well as a coming-of-age novel, and I could go on.

Thirteen-year-old Sophie isn’t happy about spending the summer of 1960 at her grandmother’s old house in the bayou. Bored and lonely, she can’t resist exploring the house’s maze, or making an impulsive wish for a fantasy-book adventure with herself as the heroine. What she gets instead is a real adventure: a trip back in time to 1860 and the race-haunted world of her family’s Louisiana sugar plantation. Here, President Lincoln’s Emancipation Proclamation is still two years in the future and passage of the Thirteenth Amendment is almost four years away. And here, Sophie is mistaken, by her own ancestors, for a slave.

I overlooked this book when I first came across it, making that age-old mistake of judging a book by its cover. Both shades-of-green covers seem quite bland to me. (Get this book

the cover it deserves! An image that conveys the depth, pain, and mystery of the story. Maybe something more akin to the critically acclaimed adult time travel novel Kindred.) I might have missed it altogether, but I noticed that Ana Grilo over at The Book Smugglers rated The Freedom Maze “Perfect”, so I took notice. Thanks, Ana!

I love that this book opens in 1960, as opposed to our decade. Readers who appreciate trigger warnings may wish to know that Sophie’s family uses racist terms and expresses racist ideas in a casual way that would be shocking in our era. As a reader, we can assume Sophie has absorbed some of these views, so her belief system really changes when she gets to know the slaves as individuals. The contrast between the way she saw the world before and after her time travel experience would not have been as great had the opening setting of the book been present time. The Louisiana of 1960 is as richly drawn as is 1860. For example, attitudes regarding divorced women in that era were shown, which was fascinating to me. Really, it would have been enough for Ms. Sherman to portray 1860 as vividly as she did, this is just one way she went above and beyond.

This beautiful story has an ugly fact as a central plot point: sexual violence by white slaveowners against their black female slaves. This issue is at the fore from the start of Sophie’s time travel, to its end. When Sophie turns up with no explanation at the plantation of Dr. and Mrs. Charles Fairchild, it is assumed that she is the offspring of a slave and Mr. Fairchild’s brother, Robert because she has the distinctive aquiline nose of the Fairchilds. There is not one violent scene, but rather the threat of this violence in all its nuances is the terrifying daily life backdrop for the enslaved people in the story. So although Amazon recommends this book for ages 10 and up, I would only recommend it for ages 13 and up. I was halfway though this book, kind of whipping along, when I realized that by zipping along on the surface I was not taking its full measure of layered meanings. So, I actually went back to chapter six when Sophie is first transported back in time. There is so much depth to this story, that it might be possible that much of the sexual violence could go over a young reader’s head, but they would be missing a lot that would be worthwhile to think about at an older age.

As someone who has read many time travel books, it was fun for me to have a character who was also familiar with the form. At the beginning of the book, Sophie is wishing hard

for a fun time travel adventure like that enjoyed by the characters in the classic time-travel book, The Time Garden, by Edward Eager. Even though this wasn’t my favorite book (see my review) I loved this ironic angle. But Sophie never expected to have to be a slave in her time travel trip. When she realizes what kind of “adventure” it’s going to be, she wants her story to be done, but of course it’s not, not by a long shot.

Really, if it weren’t so late and I had more time, I would rhapsodise about the dialogue in The Freedom Maze. I would love to hear from the author about the research she did in order to be able to show the slaves’ way of talking so vividly.

This book has garnered a lot of praise:

10 Responses to The Freedom Maze, by Delia Sherman