The iPhone that Saved George Washington, by David Potter

The Left Behinds: The iPhone that Saved George Washington by David Potter, (2015, 368 pages) is a story told from the point of view of twelve-year-old Mel in a funny, conversational style that makes it a fast and easy read, even though it is a somewhat thick book. This is the first book in a planned series that also includes Abe Lincoln and the Selfie that Saved the Union.

Percy Jackson fans will embrace this humorous time travel adventure … about an iPhone malfunction that sends three kids back to 1776 in time to rescue George Washington.

On Christmas Day, Mel finds General George Washington lying dead as a doornail in a stable. But Mel knows that George Washington must cross the Delaware River, or the course of American history will be changed forever.

Could Mel’s iPhone have sent him back in time to 1776? And can Mel and his schoolmates, know-it-all Bev and laid-back Brandon, come to the rescue? Perhaps, with a little help from two colonial kids and Benjamin Franklin himself. 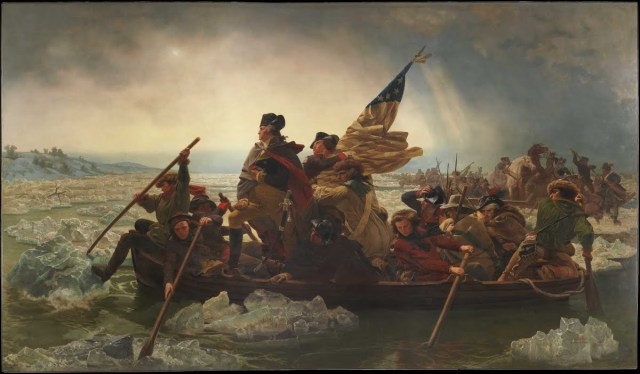 I love time travel books that teach me history. Prior to reading this book, I knew next to nothing about George Washington crossing the Delaware River. For example, I did not know our forces were crossing to reach the city of Trenton, NJ. Also, I was unaware the crossing happened on Christmas! (Apparently, I was just passing notes during history class.) This book taught me a few things about the topic, and made me interested in the topic so that after reading it I sought out more info. (Interesting info about this painting here.)

There is a lot of conversation and action in this book which makes it a fun and speedy read. Mel, and the other two main characters, Bev, and Brandon have distinct personalities. They meet a brother-sister pair in 1776 who are also good characters. There are many fun contrasts drawn between the lives of people from 1776 and the lives of modern people. The reactions of the people to whom Mel shows his smartphone capabilities are priceless. Despite the fact that he was actually in France in 1776, Benjamin Franklin even makes an appearance which I think it is fine because he is such a fantastic character. In a note at the end, the author explains he took some liberties with history on this point in order to include Franklin.

Having the time travel portal be a smartphone with a time travel app worked brilliantly. It’s one of those ideas that seems so plainly great that, in hindsight, you wonder why no one ever used it before. The biggest problem I had with the book is the number of times–fifty-four, if Amazon’s “Look Inside” search feature is accurate–the author refers to the kids’ phones as iPhones, and not simply “cell phones” or “phones”. It seemed like free advertising for Apple. Do iPhone users always refer to their iPhones as such as in, “Can you hand me my iPhone?” I hope not. Although I admit I do say, “Has anyone seen my iPad?”, not “Has anyone seen my tablet computer?”

14 Responses to The iPhone that Saved George Washington, by David Potter