Mini-interview with Jordan Elizabeth, Author of Path to Old Talbot, and My Review

In time for Mother’s Day, comes this newly-published YA story of mother-daughter time travel,  Path to Old Talbot, by Jordan Elizabeth (March, 2017, 202 pages). Whereas some people might look at old family photographs to escape a less-than-ideal present reality, in this story Charity discovers she can physically escape to a time before she was born.

Summary from goodreads
Thirteen-year-old Charity can escape her unpleasant reality by stepping through the parlor closet of her mother’s new home, a mansion built in the 1800’s.

In her hometown of Talbot, New York, in the year 1880, she doesn’t have to worry about her depressed father skipping his medications or her mother flirting with her coworker. Instead, she gets to know the hatter’s son, who shows her a lifestyle of manners and pride. Few have ever accepted Charity’s old-fashioned ways…until now.

However, old Talbot can’t banish the present. Charity can stay in the mansion, with access to the hatter’s son in the past, and the prospect of a steady family unit with her mother and the new man in her mother’s life, or she can go back to her father, who has been given the option to straighten out his life and join them in their new home. Instead, his world unravels, and he spirals into violence and self-harm.

Torn between two worlds, Charity knows that if she doesn’t help him, she may lose him forever if he follows through on his threats of self-destruction. 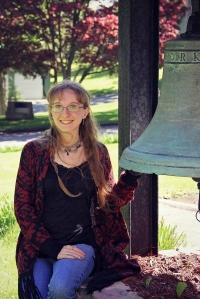 1. TTx2: In Path to Old Talbot, Charity discovers a portal to an earlier version of her hometown. I haven’t read many time travel novels, if any, in which the main character sometimes time travels with her mom. Did you know from the start that you wanted to make the portal to the past accessible not just to the main character, but also to other members of her family? How did this decision come about? Also, was it hard to balance making the past a refuge from some of Charity’s problems in the present, with imbuing the parts of the plot about Old Talbot with enough tension to keep readers interested?

JE: Years ago I had a dream about me and my mom time traveling through our back door.  I kept mulling over how to work that into a novel.  Having Charity and her mother go together was a natural progression from that.  My mom and I are very close, so if I found a portal in real life, I would take her with me!  The rest of the book flowed.  When I finished writing and reread, I was like, “Wow.  I would have loved to read this book when I was in high school!”

2.TTx2: What were the easiest and hardest parts about writing this story?

JE: The hardest parts were the depression.  I didn’t want to glamorize depression; I wanted to portray it as something real.  Researching the history was fun.  I’ve always been obsessed with history.

3. TTx2: If you could time travel anywhere at any time in history for a couple of weeks where would you go, and why?

JE: I would go back to the 1800s and travel around New York meeting my relatives.  My relatives on my mother’s side were all scattered around the state.

Just like the main character in the recently-reviewed-by-me Seven Stitches, Charity doesn’t go into the past and stay there. Instead, she travels back and forth between her present and the past. The past of Old Talbot is mostly a refuge where she doesn’t have to deal with her father and his severe depression. (Although Charity does become mired in some problems in Old Talbot.) Depression is like a character in this story. Charity loves her dad, but due to his mental illness, he is constantly disappointing her. Often, Charity is forced to take the role of an adult, trying to anticipate what her father needs in order to stay calm. When her mother starts getting more serious with another man, Charity can’t help but notice how the new guy compares favorably, and she struggles with feeling like she is betraying her dad. It was this uncommon portrayal of depression that I enjoyed most about the book.

In general, I also like the idea of time travel as an escape to a more peaceful reality. Perhaps this story appealed to me in part because I grew up in a small town that has old roots.

This is another just-published book I was made aware of by the wonderful team at the website Time Travel Nexus. At present, this book is available for free if you have Kindle Unlimited!

I blog about middle grade and YA time travel books. I'm the author of Time Jump Coins.
View all posts by Susan →
This entry was posted in Author interview, Book review, Historical fiction, YA time travel and tagged Jordan Elizabeth, Path to Old Talbot, YA time travel. Bookmark the permalink.

3 Responses to Mini-interview with Jordan Elizabeth, Author of Path to Old Talbot, and My Review