The Hunky-Dory Dairy, by Anne Lindbergh 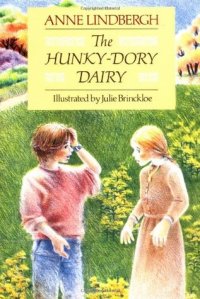 The Hunky-Dory Dairy, by Anne Lindbergh (1986, 147 pages) is another novel plucked  from one of the Goodreads Children’s Time Travel Fiction lists. The corny title and the mannequin-like girls on the cover were enough to make me want to read this one. The author happens to be the daughter of Charles and Anne Morrow Lindbergh.

When eleven-year-old Zannah McFee goes out to buy milk and a newspaper, she stumbles upon a dairy and its inhabitants who have been magically zapped from the 1800s into the 1980s. Zannah introduces them to modern conveniences and makes plans to move into the haunted dairy.

The summary does not make clear that it is more accurate to say the family that works at the dairy is marooned in the past due to magic that was done on them. Zannah likes one of the girls from the dairy family (Utopia) and imagines how great it would be to have Utopia as her sister, but I was not at all convinced that Zannah would want to move back in time and give up everything she enjoyed of modern life. Nonetheless, their friendship was sweet, and my favorite aspect of the book was seeing what modern conveniences Zannah chose to bring to the dairy to show Utopia and seeing Utopia’s reactions to the items.

Zannah’s mother, Patty, runs a preschool called Tiny Fingers. Patty is warm and loving but  scatterbrained. The little kids make a lot of  mischief as they take advantage of her lack of order which makes for several funny moments.

The story is a bit heavy-handed with the women’s lib of the period.  For example, the mom wears a shirt that says, “A woman needs a man like a fish needs a bicycle”. Mild profanity appears a few times in the book. Overall, this story set in Washington, D.C. is a gentle, pleasant story but not a must-read.

Song won the Newbery in 1983. But there is a spanking scene which is bizarre and inappropriate by today’s standards. Sometimes I fail to make my negative views about a book sufficiently clear so I will plainly say AVOID THIS ONE.

I didn’t finish my post early enough to make the list myself, but you can find many more middle grade book reviews by following the links on the MMGM list at Greg Pattridge’s blog Always in the Middle.

I blog about middle grade and YA time travel books. I'm the author of Time Jump Coins. Email me at timetravelmagic (at) yahoo (dot) com.
View all posts by Susan →
This entry was posted in Book reviews and tagged Anne Lindbergh, kids' time travel stories, middle grade fiction, The Hunky-Dory Dairy, time travel books for children. Bookmark the permalink.

3 Responses to The Hunky-Dory Dairy, by Anne Lindbergh