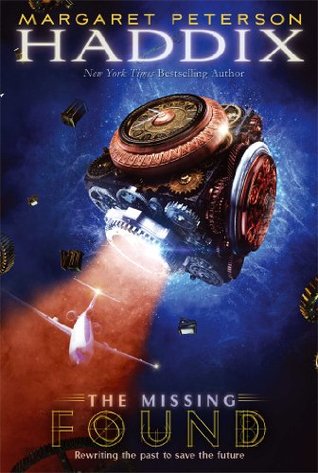 A plane lands in an airport with 36 infants aboard. No flight attendant, no pilot. No one knows where the plane came from, or who the babies are. Because of this unbeatable premise I had for years been wanting to read Found, the first book in The Missing series by Margaret Peterson Haddix, (2008, 314 pages), and last week I finally did so.  Here is the description from Goodreads:

Thirteen-year-old Jonah has always known that he was adopted, and he’s never thought it was any big deal. Then he and a new friend, Chip, who’s also adopted, begin receiving mysterious letters. The first one says, “You are one of the missing.” The second one says, “Beware! They’re coming back to get you.”

Jonah, Chip, and Jonah’s sister, Katherine, are plunged into a mystery that involves the FBI, a vast smuggling operation, an airplane that appeared out of nowhere — and people who seem to appear and disappear at will. The kids discover they are caught in a battle between two opposing forces that want very different things for Jonah and Chip’s lives.

Do Jonah and Chip have any choice in the matter? And what should they choose when both alternatives are horrifying?

The baby laden plane is the backstory of Found. All the babies found homes via adoption. Jonah and Chip were two of those babies. Found is a suspenseful story. The notes Jonah and Chip receive create a tension that kept me flipping the pages quickly. You want to know who is sending the notes, why the kids are in danger, and of course where those babies came from in the first place.

Yet, since I’d previously read the second book in this series, Sent, and loved it, I was a little disappointed. I actually felt like the action in Found could  have been sped up throughout most of the book. Chip spends a lot of time being terrified, and it starts to get a little old. The plot picks up momentum at the end. Chip and Jonah are well-developed, likeable characters. But at the end of the book Jonah takes on a leadership role in a way that did not seem entirely believable. Also, near the end of the book Jonah, Chip and Katherine recognize that a structure might be a trap, and enter it anyway. “Don’t go in!” I was screaming inside. And really, they were smart cookies, why would they go in?

Here is the link to the author’s website where you can see what covers of Found from other countries such as Poland look like. I really prefer the covers depicting a plane, as well as this

older cover image of blurry people to the current cover image now used for every book in the series of a cube-shaped thingamabob. As many people have noted, the ending of Found is not in itself very satisfying. Rather, it is a setup for the rest of the series. I’m greatly looking forward to reading the third book in the series, Sabotaged, because it features Virginia Dare and the Lost Colony of Roanoke. I’ve always been interested in this mystery, and since my fourth-grade daughter has been studying this as part of her state-related curriculum my interest has been piqued anew. Also, I’m sure it will have more actual time travel action than Found.

Because I was surprised that I liked the second book in the series more than the first, I would love to know what you readers think.

11 Responses to Found: The Missing: Book 1, by Margaret Peterson Haddix