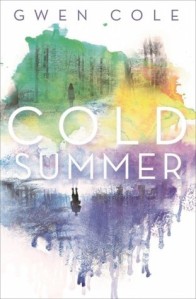 Reading the YA novel Cold Summer by Gwen Cole, (2017, 334 pages) is the perfect way to spend a few relaxing hours this summer, if you enjoy a well-written time travel romance. I certainly do.

I have a pet peeve about book titles that sound intriguing, but when you finish the book leave you wondering how they are connected to the plot. Kudos to Cole for picking a strong and concise title that perfectly fits the book.

Kale Jackson has spent years trying to control his time-traveling ability but hasn’t had much luck. One day he lives in 1945, fighting in the war as a sharpshooter and helplessly watching soldiers—friends—die. Then the next day, he’s back in the present, where WWII has bled into his modern life in the form of PTSD, straining his relationship with his father and the few friends he has left. Every day it becomes harder to hide his battle wounds, both physical and mental, from the past.

When the ex-girl-next-door, Harper, moves back to town, thoughts of what could be if only he had a normal life begin to haunt him. Harper reminds him of the person he was before the PTSD, which helps anchor him to the present. With practice, maybe Kale could remain in the present permanently and never step foot on a battlefield again. Maybe he can have the normal life he craves.

But then Harper finds Kale’s name in a historical article—and he’s listed as a casualty of the war. Kale knows now that he must learn to control his time-traveling ability to save himself and his chance at a life with Harper. Otherwise, he’ll be killed in a time where he doesn’t belong by a bullet that was never meant for him.

Main character Kale goes back and forth between his rural community in the midwest and the front lines of Germany during World War II. The way Time sucks up Kale, depositing him unwillingly in 1945, then spits him back out, bruised, battered, bloody and emotionally drained into the present creates a lot of suspense. Kale cannot predict when he will be summoned back to the trenches. The only clue he has that a time travel episode is imminent is that he gets very cold. He can delay the travel for a couple of hours by warming his body in a really hot shower but eventually the cold overcomes him and he’s gone. I’d never seen falling body temperature associated with time travel before, and the idea worked really well. When Kale and Harper start to get closer Kale becomes more desperate to remain in the present. Every time he got sucked back I was like, “Nooooo!”

The main characters and even the secondary characters are believable and likeable. I especially liked Kale’s friend Miles who provides comic relief. Both of the main characters have parents who are flawed but loving. The way Kale and Harper deal with conflicts with family members seems realistic. I almost always enjoy books with chapters written with an alternating point of view, and the way this book goes back and forth between Kale’s voice and Harper’s doesn’t disappoint. The alternating chapters is a great way to show how the romance is developing. It’s a sweet romance; although some sexual activity is alluded to, it is not explicit. I would let a fifth grader read it.

There were a couple of things I didn’t like about the book. I prefer more historical details in my time travel stories. Indeed, for a while I couldn’t tell in which war Kale was fighting. Due to the lack of details, it could have been any war. However, this is unlikely to bother many teen readers. In addition, the author could have benefited from the services of a copy editor.

I found this novel on the monthly list of newly-published time travel books at Time Travel Nexus. Check it out!

I blog about middle grade and YA time travel books. I'm the author of Time Jump Coins. Email me at timetravelmagic (at) yahoo (dot) com.
View all posts by Susan →
This entry was posted in Book reviews and tagged Cold Summer, Gwen Cole, new YA fiction, World War II time travel, YA time travel. Bookmark the permalink.

3 Responses to Review of Cold Summer, by Gwen Cole