Escape from the Great Earthquake (Ranger in Time #6) 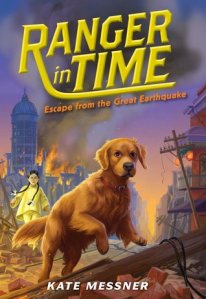 Escape from the Great Earthquake, (Ranger in Time #6)  by Kate Messner, (2017, 160 pages), does a great job of capturing the chaos that occurred in the aftermath of the earthquake, as well as the racism that existed toward Chinese immigrants at that time.

Ranger travels to San Francisco and meets Lily Chen. She was sent from China to America to work as a young servant, but she dreams of studying to be a doctor. When the Great Earthquake hits, Ranger arrives in time to rescue Lily from falling beams in the mission house where she lives. Together they flee to safety, stopping to help another girl, May Wong, save her little brother from the family’s collapsed market. Lily and May try to make their way through the ruined city with Ranger at their side. But can they escape crumbling buildings and raging fires, all while facing anti-Chinese discrimination?

I’ve read and reviewed on this blog the previous five Ranger in Time books (#1,#2, #3, #4,#5). I recommend all of them. This series depicts kids facing dangerous situations in history, somewhat like the I Survived series. Messner always strikes the perfect balance between danger and security. There are scary things happening, but Ranger is always there to provide comfort and companionship, and to help in ways that only a dog could.

I learned something about the sad history of discrimination toward Chinese immigrants in the early 1900’s from the story, and I learned more from the informative Author’s Note at the end of the book. The Chinese Exclusion Act of 1882 banned most Chinese people from coming to the U.S. Chinese people who could not afford to feed their children sometimes sent them to the U.S. with forged papers. Many of these”paper sons” and “paper daughters” often ended up being exploited. The earthquake broke many water lines in San Franciso, so that fires that occurred could not be put out, and a lot of the city was destroyed by fire. Incredibly, discrimination continued unabated even amid this disaster, in that Chinese patients that were injured had to go to a section of the city separate from everyone else.

A very small part of each Ranger in Time book talks about what is going on with Ranger’s regular family. I love that the subplot in this book involved his family welcoming a refugee family to their town. This was a great subplot to pair with the story since both plots involved the challenges immigrants face.

Within the back matter of each book in this series Messner gives a sneak peek of the next story. Book #7 will be D-Day: Battle on the Beach.

You may also like: I Survived the San Francisco Earthquake, 1906, by Lauren Tarshis.